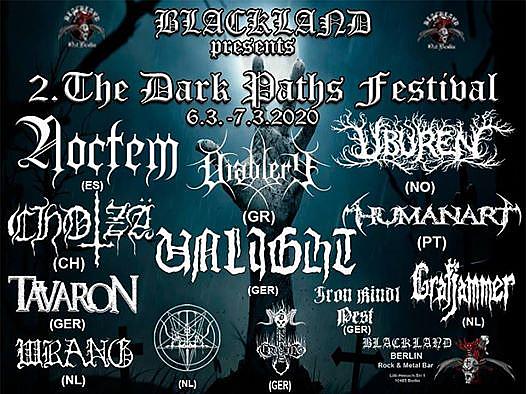 Humanart-
were founded in September 1998 in Santo Tirso (Porto, Portugal). After a year of experimenting and composing the band moved into the studio Rec N` Roll (Oct 1999) to record their first opus "Fossil" (author's edition in MCD format), produced by Luis Barros and released in February 2000.

For the next 4 years, Humanart played several dates for Portugal and shared stage with many national and foreign bands increasing its cohesion and stability, but also leaving their own mark and place in the Portuguese Black Metal scene! In September 2004, with the consolidation of sound and musicians, the band released their second work "Hymn Obscura" (author's edition), again in MCD format, recorded and produced in GraveStudio in Braga, by Pedro Alves and Humanart.

In September of 2005, they became for a period of time a one-man-band (JJ guitarist and one of the Humanart founders who was writing all the new material) at the beginning of 2007 new members where recruited. Along with 2008 came a series of performances on various stages all over the country with the renewed line up. 2008 also saw the celebration of the band’s 10th Anniversary and the release of the Special Tape Edition "X Years of Black Crusade” - featuring two original songs and a cover (Carpathian Forest), recorded in the rehearsal studio Pitbull Studio by Praise Unholy Records.

From 2009 to 2012 the band concentrated on more live shows. At the end of 2013 Humanart started the recording process of their new album "Lightbringer" (mixed and produced by André Rodrigues - Full Power Studio) –again an author`s edition. The album was officially presented in April 2014 at Hard Club (Porto), Frenopatiko (Vigo) and Side B (Lisbon).

In 2015 the band continued touring and in March 2016 the band released their first official video clip for the song "The Darkest Light".

2017 started with many appearances in festivals and events and at the same time the band started working on their next album.

The new album “(Further) Into The Depths” started to be recorded/mixed in September of 2008 at Hanuman Studio by Bruno Silva and was mastered in Sweden at Necromorbus Studio by Tore Stjerna (Armagedda, Behexen, Funeral Mist, Merrimak, Watain). The Design was made by Gustavo Sazes (Morbid Angel, Arch Enemy, Machine Head) and it was released in April of 2019 by Dark Age Productions and distributed by Ultraje.

For the ones not familiar with their sound Humanart play tradicional Black Metal with inspiration from the 90`s merged with an unique interpretation forged and aged in the last two decades of underground.
https://www.facebook.com/Humanart/
https://www.reverbnation.com/humanart
https://www.youtube.com/channel/UCBfB47Q0V5-U_1m4T1kN3xw

Diablery-
is a Message - a herald of the Aeon in its luciferian expression. For us, "Lucifer", is also acknowledged as Man's Inner Flame or Will. We believe that 'Will' is the first pillar of Attaining Wisdom, Knowledge, Freedom and ultimately the Godhead.

Diablery were created by Nimerius in 2008 in Chalkis, GR, but now are based in Athens, Greece. We have released 2 EPs ("The Catharsis" 2010, "The Eye" 2011), 1 album ("Architect" 2014 / mixed and mastered by Børge Finstad / Toproom Studio) and 1 split mini album ("Entropy" 2017 / mixed and mastered by Void of Cosmos studio) with Shadowcraft through "Black Market Metal" from Canada. Both "Architect" and "Entropy" have received very good feedback and reviews.

Throughout the years we have performed beside many bands, the most respectful of them being Inquisition, Arcturus, Negura Bunget, Schammasch, Altar of Plagues, Year of no Light, Negator, Grimegod. Also a mini-tour took part in several cities of Greece, a memorial gig at "Astarte Fest" in the honor and memory of Astarte's frontwoman, Tristessa and our participation at Freie Geister fest in Bremen, DE.

Grafjammer -
hails from Utrecht, the Netherlands and started in 2007 as a grimy studio project. Since 2012 it is also a grimy live act.

Through the years there have been several line-up changes, but since 2016 the band operates as the current quintet.

Grafjammer plays primitive Dutch necrorock, which is basically first and second wave black metal thrown into a blender with a hearty pinch of punk, d-beat and

Lyrically it is mainly about misanthropy and death, often combined with old Dutch folktales, ghost stories and maritime subjects.

The band regularly performs on stages in their home country and abroad and is currently wrapping up a split 7-inch with their fellow Utrecht residents Wrang.

This single with the title 'Koude Gracht, Gramme Werf' will be available through Worship The Goat on 22-03-2019.

Wrang-
is a black metal band from Utrecht, the Netherlands and was founded in 2013 by Valr and Galgenvot. Soon Eitr joined the band and made the Wrang militia complete. Together with live members Mercur and Vuygh Wrang are armed and ready to create sonic filth and aim for maximum casualties.

The band regularly performs on stages in their home country, as well as abroad, and is currently wrapping up a split 7-inch with fellow Utrecht natives, Grafjammer.
The new single, “Koude Gracht, Gramme Werf”, will be out soon through Worship the Goat.

THE TRUTH IS MARCHING ON !!!

Yaotzin( Black Metal / Dutch Black Metal ) is originally formed in 1995, in the Alkmaar area by Theo van der Plas on vocals and Bas Polder on drums. Soon after Yaotzin was formed Joeri Pronk joined the band on guitar and Joeri’s girlfriend at the time, Wieteke, joined to play bass. She got replaced by Merijn Pronk after recording the first demo tape in 1995 entitled ‘The Forrest’.

The first live performances were played at local bars and local stages. At a festival at the ‘Argus’ podium in April 1996 Yaotzin played with a band ‘Lascivious’. Arno van de Reep got scouted as a second guitarist and In 1996 Yaotzin recorded 2 demo tapes entitled ‘Moonrise’ and ‘in the Mist’. Joeri left Yaotzin in 1996 and Arno became the sole guitar player. After several gigs and festivals Merijn also left and got replaced by Sander van Helvoort. Finally, Yaotzin became a solid Black Metal War Machine.

In July 1998 the bands first full length album was recorded at the ‘Midfloor’ studios, entitled ‘Heaven Burning Bleeding’. It was released as a limited edition official CD and distributed in The Netherlands through Displeased Records, some local metal record shops and of course, at live shows. In Sweden it was distributed through Rock Records. Although the album had a mediocre sound quality, it earned Yaotzin a cult-status within the Dutch Black Metal scene.

Magazines such as Aardschok, Live Xs, Fret and Oor gave Yaotzin some descent reviews. The year 1998 ended with Yaotzin doing a very good show at ‘de Kade’ in Zaandam with the well-known Dutch black/death metal band Consolation. Yaotzin did some touring and live shows during 1999 and 2000 before a new rehearsal room was found at the Black Noise Studio. Here ‘The Rehearsal tracks’ bootleg was recorded in 2001. Although it featured brand new tracks, it was released as a bootleg because these tracks became available on the internet before they were finished and even recorded properly. Some of these tracks even ended up on several compilation albums in Poland and Germany.

In 2001, Yaotzin started looking for a second guitar player and after some bad auditions Yaotzin told a befriended musician to practice 7 songs. The challenge; play all songs by the end of the week and he would be welcome to join Yaotzin. Spoor accepted this challenge and so, by the end of 2001, Szandor S. Spoor became a permanent fifth band member.

During the years 2002 till 2004, Yaotzin experienced some difficult years. Due to personal issues Yaotzin was prevented from playing as often as they would have liked. By the end of 2004 things seemed to get back on track with Yaotzin doing a small tour in Germany. Back in the Netherlands they joined the Sear Bliss 2004 tour for the Dutch shows and by the end of 2004 plans were made to bring out a new album. Again Yaotzin suffered some serious setbacks as Theo was seriously injured in a traffic accident and had to recover for the years 2005 and 2006. Meanwhile the other band members started recording the new album themselves, planning to release it as a semiprofessional recording. When the album was finally finished in 2006, the recordings didn’t turn out the way they should have. Some parts were great but in total it lacked the right speed or attitude. It needed more aggression, noise and the Black Metal warfare which Yaotzin was known for. All of these recordings were scrapped and discarded.

In 2007, Yaotzin continued recording their material and did a live show for DVD recording in ‘the Kompleks’. Beyond the Digit (www.beyondthedigit.nl)) captured and provided Yaotzin the material by filming the brutal live show with multiple cameras. By the end of 2007, the new recordings were finished (again) and this time the recordings turned out to be satisfactory. Spoor left Yaotzin soon after the album was completed in 2008. March 2008 saw the release of the ‘Mors Christii’ album and it got released through the Zwaertgevegt label. In 2009 Yaotzin played a final show which was released as a live album entitled ‘Last breath of Live in XiniX’. By 2009 Yaotzin went on a indefinite hiatus.

The end of 2013 sees the rebirth of Yaotzin. The band is reformed by Theo and Bas but had undergone some line-up changes. The new line-up consists; Theo on vocals, Bas on drums, Spoor returning to play guitar and new recruit Nick Kühl on bass guitar. Yaotzin also has an official fifth member even though he won’t be playing any instruments. Patrick Daniel will be responsible for all of Yaotzin’s demonic artwork, visual effects and official band pics.

Yaotzin is back in full force to bring Chaos again! Making sure people understand Yaotzin is back, the band started writing, recording and working on brutal new material. January 2014 sees the official release of the new ‘Chaosbringer’ MCD. This recording contains new material and with this release the band is ready for the live masses once more!! Yaotzin will be playing live as much as possible in support of this most recent release. It will be distributed through the Zwaertgevegt label on limited tape and cd release!

After some blasting gigs Yaotzin decided that they needed a fifth member also for live shows for a more brutal and booming sound on stage, therefore they decided to start looking for a bassist as Nick Kuhl changed his position to guitarist.
At the end of may Jesse Peetoom joined Yaotzin's forces to fill in the gap for the bass. Now Yaotzin is stonger then ever and ready to conquer the world so prepare...

At the end of 2015 It was decided to record an EP called "Visions".
This EP was released in January 2016 with a very limited amount of 20 pieces, may it be as it seems but this was due to the reason of Yaotzin's 20th anniversery.
Later that year also due to the 20 years of existence we decided to start a tour also known as the;
"20 years of black chaos tour".

With an ideology of resurfacing the Viking folklore with a serious sound and focus on the darker and melancholic parts.

The music is ferocious and harsh, but is full of underlying melodies that adds a real majestic and monumental feel. With a wide variety of vocals shrieks, growls to spoken words and clean shouting

Uburen has preformed since 2011 throughout England at Bloodstock open air, through Poland, Germany, Russia, Scotland, Portugal and have recently been touring through Mexico again this time also as headliner at festivals as Beer Mosh & Unity
https://www.facebook.com/uburen/
https://www.youtube.com/channel/UCSBYsDHX94yyccYmRWQ4RPg
https://open.spotify.com/artist/05piGk6N8G495RPMAbRMtO