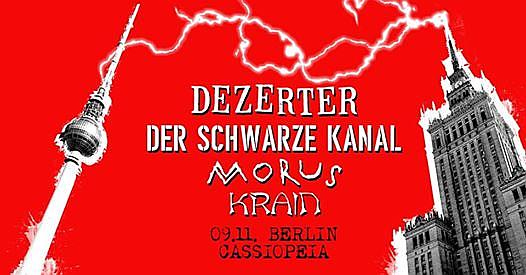 The fall of the Berlin Wall’s 30th anniversary is a great opportunity to go back and focus on the strong communication and cooperation which existed throughout the Eastern bloc underground within the punk scenes at the time. One of the best examples of this is the productive cooperation between punx from Warsaw and East Berlin in the 80’s. Zines were smuggled (and sometimes confiscated), tapes were exchanged, Polish bands had a opportunity to play in Germany, and East German bands were coming to tour Poland. The art group Praffdata did a performance representing the fall of the Berlin wall before it actually happened. DDR scene reports were regularly published in the main Polish fanzine of the era – Qqryq. Around the same time people from Qqryq started their own label and their second release was the “We’re the flowers in the redzone” tape compilation with bands from Eastern Germany, Poland and Hungary. This compilation is one of the best documents of this cooperation and at the same time is the first punk compilation focused on Eastern bloc music.
This event is a release-show for vinyl reissue of this important compilation and it’s coming out on Warsaw Pact Records (Warsaw), Edition Iron Curtain Radio (Leipzig, division of Major Label) and Trottel Records (Budapest).

One of the bands that appeared on that compilation is DEZERTER, who are truly a classic, and one of the longest-active Punk/HC bands in Poland for more than 35 years. Reading their great lyrics offers insight and knowledge into recent Polish history both before and after the system’s transformation. This incredibly influential band had a chance to play in Germany many times, and their songs appeared on many compilations released in Germany.

One of the last active bands from the DDR times is DER SCHWARZE KANAL from Leipzig, who started in 1989 but their history is even longer because of their link to the legendary L’ATTENTAT. This was one of the most important band from DDR era.

MORUS and KRAIN are both from Warsaw and even if they started later (Krain in the early 90’s and Morus just a few years ago), members of these bands are an integral part of this history. The drummer of KRAIN is a ex-member of TRYBUNA BRUDU, a band who appeared on “We’re the flowers in the redzone” compilation and they played in Eastern Berlin. He was also part of the Qqryq fanzine and label.

Some members of MORUS played many shows in Germany and also throughout Europe with their former bands POST REGIMENT and ANTIDOTUM as a result of the Warsaw-Berlin punk cooperation which happened back in the 80’s. MORUS continues this tradition and their singer Nika is involved in both the Warsaw to Berlin scenes.

This whole story continues to have new chapters surrounding the punk friendships, communication and cooperation which have lasted more than 30 years!

Before the show we want to invite you for a discussion panel with Piotr “Pietia” Wierzbicki and Zbyszek Matera (Qqryq), Herne (Berlin, Kopi), and Jark Guła (Praffdata). We will haver more details on it soon!