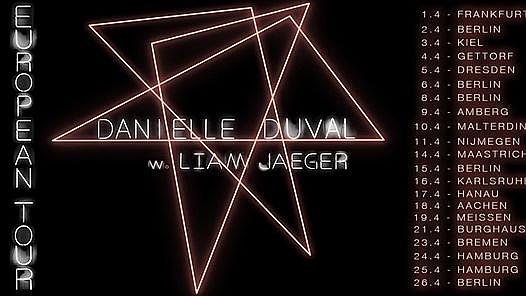 Montreal-born/Toronto-based, bilingual indie rocker, of Egyptian-Lebanese-French-South African-Mauritian descent, Danielle Duval, is devoted to her own brand of melodic indie rock that draws heavily from the quirky sounds of synth pop and new wave. The singer-songwriter and multi-instrumentalist is set to embark on her first European tour this coming April, 2020; she'll hit the road with her long-time friend and band mate, guitar prodigy Liam Jaeger, for a whole month of special, intimate, unplugged performances.

"Duval has a knack for writing melodious and rocking pop songs”– Exclaim!

“Emotive, melodic and honest; and all pulled together with a strong pop sensibility...It's a beautiful thing to hear and be a part of; the infectious melodies and hooks pull you in, while the honesty and depth of emotion keep you there.”– Ottawa Life

Danielle Duval first made waves with the release of her self-produced debut ep, L’Étranger, which featured the sultry, heart-wrenching transformation of Grease anthem You’re The One That I Want. The track aired on David Duchovny’s hit TV series Californication and has subsequently reached close to 900k spins on Spotify. Duval later released her acclaimed debut full-length titled Of The Valley. The LP featured the popular tracks “Ambulance”and “Imposter”, as well as the feisty radio single “Day Becomes Night”.

Classical guitarist Liam Jaeger will open the show with solo guitar arrangements of classic pieces by Brazilian composer Antônio Carlos Jobim (The Girl from Ipanema), French-Hungarian composer Joseph Kosma (Autumn Leaves - Les Feuilles Mortes), as well as a few Liam Jaeger originals. Liam is a multi-instrumentalist / producer from Toronto. He is an active performer on the classical guitar, electric guitar, drums and synthesizers, and has toured North America and Europe many times with his bands The Balconies, Pernice Brothers, Sampson, and Taylor Knox. He has produced, engineered, and/or performed on recordings for many artists such as The Balconies, Pernice Brothers, Danielle Duval, LOLAA, The Cola Heads, Tom Boy, Sampson, Neon Wave.