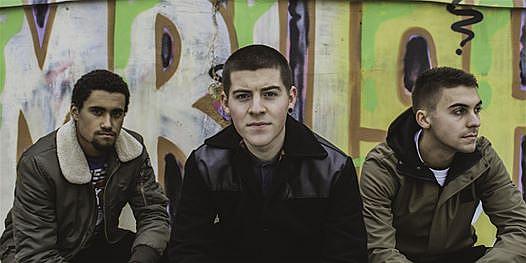 Grade 2 understand that the first rule of punk rock is to make something happen.
Formed in Ryde on the Isle of Wight in 2013, when its members were schoolboys aged just 15, the three musicians quickly discovered that their options on a small island south of Southampton were limited. Casting their gaze upon wider horizons, the group boarded the Isle of Wight ferry for shows on the mainland, and, in time, concerts in continental Europe and, lately, the United States.
Armed with a new album - produced by Rancids' Tim Armstrong - that finally captures the band in all its spirited energy, Grade 2 are planning once more to get in the van and to bring the noise off the island. “I want us to be a band that stands the test of time,” says Jack (Grade 2). “I want to be able to listen back to Graveyard Island twenty years from now and go, ‘Yeah, that still sounds good; it still sounds relevant.’ And if we can manage that, we’ve got a chance to make not just the songs last, but also the band.”
“And that’s what we really want to do,” adds Sid. “We want to go out there and do this as hard as we can, and for as long as we can.”
Why? “Because the last thing in the world we want is to have to go out and get proper jobs,” he says, sounding like the punk that he is.