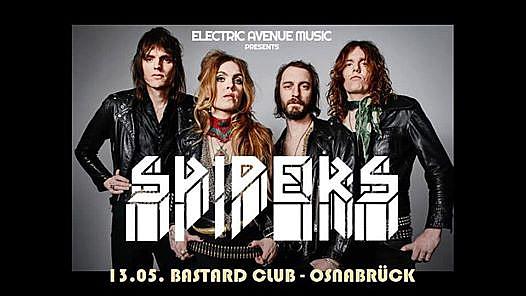 INFO:
Spiders weave a wild web of reckless and rip-roaring riffs, spellbinding vocals, seductive rhythms, sticky hooks, and punk soul. The quartet—Ann-Sofie Hoyles [vocals], John Hoyles [guitar], Olle Griphammar [bass], and Ricard Harryson [drums]—crawled out of their native Gothenburg, Sweden rocking leather and turned up to eleven with the 2012 full length-debut Flash Point. Between a marathon of shows, they unleashed 2014’s Shake Electric powered by the title track. A marathon of touring followed as they ignited audiences alongside everyone from Kvelertak and Uncle Acid & The Deadbeats to Graveyard and Metallica. Now, Spiders’ 2018 third offering, Killer Machine, sees them tread new territory once again, while preserving their sonic signatures… “If Alice Cooper got married to Stevie Nicks, their child would be Killer Machine,” smiles AnnSofie. “That’s the vibe we wanted. The old influences are in there, but it’s a little darker. If Shake Electric was gold and sparkling, this is more black.” Taking a six-month break from the road, the group devoted more time than ever to writing and recording. In 2017, they entered the legendary Music A Matic Studio in Gothenburg with iconic guitarist and producer Chips Kiesbye [The Hellacopters, Graveyard]. Utilizing a bevy of vintage gear and equipment, they unlocked their punky side like never before. “With all of that touring, we had more confidence and a punk vibe in the studio,” affirms John. “We just went for it.” “We didn’t think as much,” adds Ann-Sofie. “We can work better together, because we’ve known each other for so many years. We’ve learned about ourselves, so we can really communicate who we are.” That identity defines the record’s debut single “Dead Or Alive.” Marking another first, the band co-wrote with Swedish GRAMMY® Award winner Peter Kvint, landing a one-two punch of revved up guitars and soulful howls. “The world is crazy right now,” Ann-Sofie continues. “People just walk around with their eyes on their telephones like zombies. They don’t even see you. They don’t look at each other. It’s not a nice lifestyle, because everyone is into something else all the time. It asks, ‘What the fuck is going on? Why do we live our lives like this? What happened?’ That’s ‘Dead Or Alive.’”

Elsewhere, the politically charged “Shock and Awe” packs venomous spite into a thrash-y gallop. Meanwhile, harmonica punctuates “Heartbreak” with slick swagger and heavy heart. “That name Killer Machine is important in many ways,” says John. “It’s a big moment for us, but we’re keeping the meaning secret.” In the end, that secret is worth trying to unlock for fans everywhere. “When you listen to us, I want you to say, ‘Fuck off,’ to everything,” Ann-Sofie leaves off. “We need the energy and power from music to live through the shitty side society and everything going on. Maybe you can get some strength from this album, move on, and do something good with your life.” “I just want you to think rock ‘n’ roll is alive and well,” concludes John. Spiders definitely prove that.

Killer Machine is recorded and mixed at Music A Matic Studio in Gothenburg with Chips Kiesbye (The Hellacopters, Millencollin and currently with Graveyard) as producer and is mixed by Henryk Lipp (D.A.D, Millencollin)