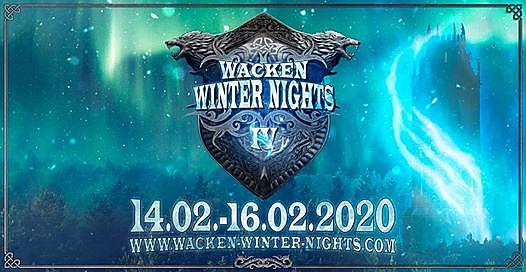 In 2020 the winter realm will open it’s gates for the fourth time! Wacken Winter Nights is not a small Wacken Open Air taking place in Winter. It is a very own concept!

Come and join us on an enchanting journey through magical worlds and performances.

Experience renowned bands from several genres, such as medieval rock, symphonic metal, pagan and viking metal, and even mystic folk playing full sets inside the Ice Palace. Just a few steps away, more amazing music is awaiting in the Theatre of Grace. And a few select special performances will happen in the enchanting Old Village Church.

Stroll through the picturesque festival village where traditional craftsmen display their skills and offer their handmade goods at the market. There you can also enjoy fine medieval treats, of which many are produced organically. Encounter mythical creatures, wandering bards, magicians and storytellers in the Mystic Woods or gather around several warm campfires.

Furthermore exhibitions and workshops are in the planing stages.

After its successful first years and winning the prestigious BEST NEW FESTIVAL 2017 category at the European Festival Awards, WACKEN WINTER NIGHTS are now ready for the next level!